A long-serving police captain in Lampang province has been relieved from police service after he was caught red-handed for taking bribes in exchange for dropping a case against a suspect.

Pol Maj-Gen Niyom Duangsri, commander of Lampang police, said he ordered the dismissal of Pol Cpt Kittikarn Yalangka, deputy inspector of Khelang Nakhon police, because he has tarnished the reputation of the police force and is a bad example for the other policemen.

A sting operation was hatched and carried out by police from the Counter Corruption Division, Lampang provincial police and officials from the Public Sector Anti-Corruption Commission to ensnare Pol Cpt Kittikarn after complaints from some suspects that the officer had demanded bribes in exchange for having their cases dropped.

A plainclothes police officer posing as a representative of a suspect met Pol Cpt Kittikarn at a coffee shop for talks about a crime case and the amount of bribe demanded. After the talk, the two men walked to Pol Cpt Kittikarn’s car to make payment of the bribe.

Once payment was made, several other policemen and PACC officials who had laid in waiting near the coffee shop sprang into action and made the arrest. A 20,000-baht bribe money was found in his possession.

Pol Cpt Kittikarn has been in police service for 36 years and has worked in several police stations in Lampang and other northern provinces. He was last moved to Khelang Nakhon police station in Lampang’s Muang district four months ago. 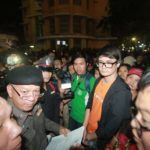