A 41-year-old surfer was airlifted to hospital Sunday after being bitten in a suspected shark attack on Australia’s famed Byron Bay.

The man was out catching waves shortly after dawn at Belongil Beach when police said he was “bitten on the leg by a shark”.

Images taken shortly after appeared to show a chunk bitten out of the tail of the man’s surfboard.

“I was freaking. When I heard the screams he was making in the water and then I saw a chunk of his board floating off, that’s when I realised it was pretty bad,” a fellow surfer told national broadcaster ABC.

The victim managed to float back to shore on his board and signalled to other beachgoers for help.

“He was treated at the scene by NSW Ambulance paramedics, before being airlifted to Gold Coast University Hospital,” police said.

He is said to be in a serious but stable condition.

Byron Bay is popular with surfers and tourists alike.

Despite tens of millions of trips to the beach taken in Australia every year, shark attacks are rare.

There were 27 shark attacks in Australian waters last year, according to data compiled by Sydney’s Taronga Zoo, including one fatal incident. 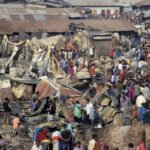