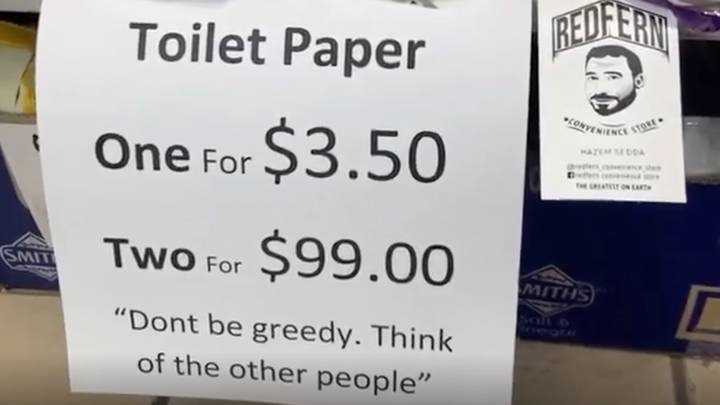 Australia appeared to be the leader in the toilet paper hoarding crisis, with many other countries looking at us in disbelief.

Shelves of loo roll were constantly empty and many resorted to alternatives like baby wipes or even tried to nick a few rolls from work.

Since then, major supermarkets have introduced rules around how many packets people could walk away with to prevent more stockpiling.

However, one convenience store in Sydney came up with an even better idea.

Redfern Convenience Store owner Hazem Sedda has been charging $3.50 per packet of toilet paper and then jacked it up to $99 for a second.

The price was attached to a sign that read ‘don’t be greedy, think of other people’.

Mr Sedda told the Daily Mail: “Everyone was taking two or three and telling me it was for their mum or sister. It was annoying they kept ignoring the sign.

“When I put the two pack for $99 everyone was just taking one. No no one came up with two.

“All the old people and all the desperate people were able to get some as well, that was the whole point.”

The move will no doubt ensure that everyone will be able to get what they need and not leave anyone without something to wipe their behind with.

Thankfully, Coles and Woolworths have revealed that stock has been returning to normal levels over the past few days after weeks of panic buying.

Coles chief operating officer Matt Swindells told Channel 9: “I’m pleased to report that certainly the shopping through our supermarket business has returned somewhere towards normal, and that’s allowed the teams with all the hard work they’re putting in to get stock back into the system.

“Anybody that has shopped over the weekend would see the gaps on shelves are still there and so we’ve got to continue this process of normalised demand, pushing more stock than ever, to put the supermarkets back together.

Woolworths managing director Claire Peters added: “Clearly our supply chain, just as Matt has described, is essential to restocking of the shelves. So we are able to do that across all borders in Australia.”

The decline in stockpiling can also be attributed to both brands introducing harsh measures on what people could and couldn’t buy.

Woolworths issued a statement, saying: “There is now a per customer, per shop limit of two items from any single category on most packaged products across Woolworths Supermarkets and Metro stores and online.

“This means customers will only be able to buy two products from any single included category, regardless of the brand or variety. There are some exceptions where no limits remain, such as fruit and vegetables, fresh milk and baby food.”

Toilet paper is still limited to one pack per customer. 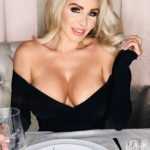 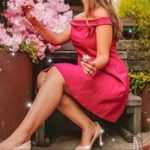