A worker for a road construction contractor in Trang was shot dead on Thursday morning, two days after a bulldozer and road paver belonging to the firm were torched.

The shooting happened in front of a shop on Koh Pood-Nong Kla in Moo 6 in Tambon Na Ninlar of Trang’s Muang district.

Witnesses said while 14 workers were arriving to resume the road construction, two men arrived on a motorcycle and the passenger shot Prakong at point-blank range in his neck.

He fired two more shots at a bulldozer and the two sped off.

The company’s bulldozer and road paver were set on fire at 1am on Tuesday.

The shooting took place about 300 metres from where the machines were set on fire.

The Bt2.94-million road construction project was awarded by the Trang Provincial Administrative Organisation to the firm from outside Trang.

Police believe conflicts involving the project were behind the attacks. 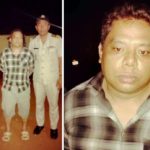