Foreigners Committing Crimes: Officers of the Thailand’s Action Taskforce for Information Technology Crime Suppression (TACTICS) have arrested foreigners suspected of being involved in criminal activities in the country.

On Thursday, TACTICS announced the arrests of the foreign suspects believed to be involved in criminal activities which may compromise national security.

One of the cases is the arrest of Vitaliy Garievich Rulyushin, a former Honorary Consul at Vladivostok, Russia, who used his former position to put up online advertisement and used stamps at the consulate to issue visas, collecting 5,400 ruble per applicants.

The police have also arrested two Britons in Chonburi province. The suspects are members of a drug ring fleeing from their investigation into Thailand, as well as three pickpockets from the Philippines who usually operated at crowded metro stations targeting foreigners.

The three pickpockets are a part of the six pickpockets for whom arrest warrants have been issued. The police have revealed one of the remaining three at large has fled Thailand, while they are working to track down the other two based on CCTV image.

Police added that some of foreign criminals may successfully escape Thailand only to change their name and passport, before coming back again. 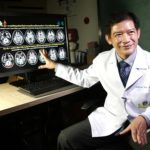