A breach in the wall of a reservoir in Bang Saphan district has widened to 15 metres, but at this stage is said to pose no threat to communities downstream.

District chief Loetyot Yaemphrai said the crack in the Morasuap reservoir dam had increased from 10 metres wide on Sunday night to 15 metres on Monday.

Four leaks initially developed in the dam after a week of heavy rain in the district and rapidly widened.

Water from Murasuap reservoir flows eastward to the Gulf of Thailand, about 25 kilometres away, through Krud canal in Ban Krud.

However, residents living along the canal have been warned to keep a precautionary eye on the water level.

Water Resources Department officials were to arrive at the reservoir on Monday to fully evaluate the damage.

Morasuap reservoir can retain 1.6 million cubic metres of water in an area of 100 rai. It is being upgraded by a private contractor under a 38 million baht project to increase its capacity after a crack was first detected in 2016.

Mr Loetyot said the work was behind schedule. He would not name the contractor. 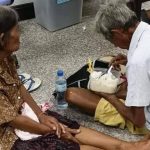 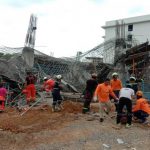 Mark KellyJune 6, 2020June 6, 2020
A Burmese worker was rescued after being forced at gunpoint to work 16 hours per...
END_OF_DOCUMENT_TOKEN_TO_BE_REPLACED