The Anti-Money Laundering Office (AMLO) has confiscated Bt4.1 million in assets from a former special-branch police officer and related persons on the suspicion that they are ill-gotten gains.

The temporary seizure will last until at least November 25.

Lt-Colonel Santhana Prayoonrat, the former deputy superintendent at Special Branch Police Division, is facing charges of extorting money from vendors at a market in Bangkok.

Several vendors at the Modern Donmuang Market lodged a complaint with police on May 8 that a Santhana-led group had extorted between Bt1,000 and Bt2,500 monthly from them between April 2016 and April 2018. According to the complainants, the gang used pressure and intimidation, with several men hovering around their stalls and sometimes scratching their cars.

As extortion is a crime under the anti-money laundering law, the Amlo ordered the temporary seizure of 12 assets from Santhana and related persons. Most of these items are vehicles.

Santhana and related persons must produce evidence to prove that these assets were not related to extortion in order for the seizure to be cancelled.

Pedestrian killed by Mercedes in Thalang 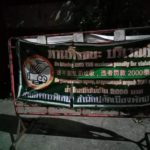