The establishment was found to have two girls under the age of 18 available at 1,500 baht a time for sex.

Daily News reported that Krua Lakhana was frequented by both foreign and Thai tourists.

Arrested was manager in charge Lakhana Patthama, 46, who will be charged with human trafficking.

Taken into evidence was the money used in the sting after an undercover officer arranged for an underage girl to be taken to a hotel. 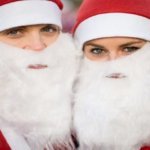 1 in 6 People Think That Santa Should Be Gender-Neutral