Home » ‘EVERYONE HAS TO HELP OUT’ WITH AIR POLLUTION, PRAYUTH SAYS

The junta leader said Tuesday that controlling the air pollution problem was everyone’s responsibility, not just the government’s.

During a cabinet meeting trip to Lampang province, Gen. Prayuth Chan-ocha said that although related state departments would investigate factories and crop burning, eradicating the smog was ultimately up to the common citizen.

“Whatever regulations we create, there would still be problems because of a lack of responsibility,” he said. “People don’t follow the laws and rules. So you can’t shove all the responsibility onto one person.”

Prayuth attributed factory, auto emissions and burning crops as major factors to the smog. He added that the government would try to halt the practice of burning agricultural crops, but did not say how.

At about 11am on Tuesday, a BT67 air force plane overflew Bangkok and sprayed 3,000 liters of water from 15,000 feet over Don Mueang Airport to try easing the pollution. Another plane did the same at about 2pm over Chatuchak district, and one more water drop is scheduled over the capital for later today.

In response to a reporter’s question about industrial regulations against creating PM2.5 particles – the smallest and most harmful type – Prayuth answered that he would refer it to the Ministries of Industry and Health to implement them, but that it was up to people to follow the regulations.

“Everyone has to help out. The government’s job is to create policies and determine its results, but there are many people creating the dust problems, so we can’t blame each other,” he said.

Prayuth also emphasized the importance of wearing protective masks, but suggested the government wouldn’t give them out to everyone. Officials have given out 30,000 pollution masks and will order 300,000 more to give out in Bangkok, according to governor Aswin Kwanmuang.

“People with purchasing power should buy some. Could we handle handing out masks to everyone? It would probably take a while,” he said. 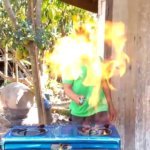 Beware! Cheap gas stoves may blow your house up