Such actions would be punishable with a fine, a jail term, or both.

This year, those posting or sharing content showing revellers wearing “sexually-provocative clothing” could be charged under the Computer Act, Siriwat said. If charged, they could face up to five years in jail, a fine of up to 100,000 Thai Baht or both.

Revellers captured on video or photos could also be charged with performing a shameful act in public under the Criminal Code and fined up to 500 Baht.

Additionally, those uploading social media posts that invite others to drink alcohol could be jailed for up to one year and fined up to 500,000 Baht, under the Alcoholic Beverage Control Act.

Indecent posts or live streams found to be against society’s good morality and the law could be also be subjected to legal action, The Nation reported.

He also urged revelers to celebrate with cultural activities and avoid behaving in ways that could violate the Computer Act and related laws, the newspaper reported.

This is in order to investigate potential violations and prevent other viewers, especially the youth, from copying such behaviour and to ensure that the festivities are celebrated according to the country’s culture and tradition.

“Be warned that TCSD officers are able to probe and to trace [postings] back to the culprits to face prosecutions, and the suspects cannot claim to not know the law or their action’s consequences or not having an illegal intention,” Paiboon said. 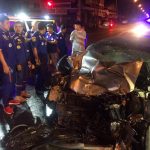 Thousands line up to go home for Songkran