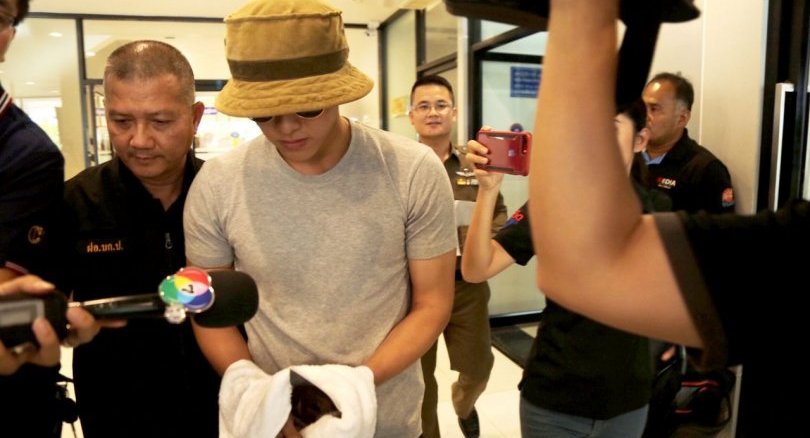 The Criminal Court has approved Bt2 million bail for the temporary release of actor Jiratpisit Jaravijit, who is allegedly involved in a Bt800 million Bitcoin scam, as police are set to seek court approval on arrest warrants for more suspects.

Meanwhile, the Anti-Money Laundering Office (Amlo) has frozen the bank accounts of 51 suspects in the multi-million-baht digital currency fraud.

In addition, Amlo seized title deeds for 15 tracts of land worth a combined Bt176 million as they were allegedly acquired using ill-gotten gains.

According to investigators, Jiratpisit, his brother, and other suspects were allegedly involved in cheating a Finnish person out of Bitcoins worth nearly Bt800 million.

The digital units were later transferred into the electronic wallets of seven persons who then converted the units into Thai baht deposited in several bank accounts.

Altogether, Bt745.7 million was transferred into multiple bank accounts while the plaintiff told police a total amount of Bt797.4 million was stolen.

Jiratpisit told investigators he was innocent and that his bank account was used by his fugitive elder brother.

Prasit Srisuwan, one of the suspects, also reported to police yesterday and denied any wrongdoing.

Parinya was found to have opened several companies in Thailand and Hong Kong in connection with the case. Finnish Bitcoin owner Aarni Otava Saarimaa was lured into transferring Bitcoins worth almost Bt800 million to Thai suspects for further investment in Thai and other securities as well as for use in Macau casinos.

Meanwhile, the Securities and Exchange Commission (SEC) said in a statement that all investors should exercise caution while considering investing in digital assets, while publishing the list of firms which may act as brokers if they apply for licences by August 14.

SEC secretary-general Rapee Sujaritkul said there have been investment scams involving digital assets and resulting in significant damages. An executive decree on digital asset regulations is now in force requiring brokers to be properly licensed to minimise investors’ risks.

The SEC said no issuer of ICOs, or Initial Coin Offerings, or ICO portals in Thailand have been licensed so far.

If investors are persuaded by brokers, trading centres or any person to invest in digital assets, they should exercise caution and cross-check the list of licensees on the SEC website.

The SEC is also working with other authorities on the ongoing investigation into the alleged Bitcoin scam and will file charges if anyone has violated the SEC law.

Due to the growing popularity of Bitcoins and other digital currencies, there have been reports of unscrupulous networks luring innocent investors into scams. However, authorities do not want to completely ban all crypto-currencies because the new technology has a wide range of useful applications needed to drive the digital economy.