The robbery of a gold shop in Na Thawi district on Saturday, in which a group of armed robbers made off with gold worth over 85 million baht, could be linked to the southern insurgency, police said on Sunday.

While the police are still waiting for more forensic evidence to back up their theory, investigators are 80% sure the case is related to the unrest in the South, said the commissioner of Provincial Police Region 9, Pol Lt Gen Ronasilp Phusara.

“The reason is that [the robbery] was well planned, and it reminded investigators of the Aug 16, 2017 robbery of Wang To Car Centre — in which five cars stolen from the shop were used in several bombings,” he said.

A van, which the group hijacked in Pattani’s Nong Chik district, was used in Saturday’s robbery at Hangthong Suthada gold shop.

According to witness accounts, there were between 17-20 people involved, he said.

“[The suspects] appeared to have planned the robbery well. Some were responsible for hijacking the van, some held the hijacked van’s driver back, while others took the robbers to their target,” he said.

“Some of the robbers dressed up as women and posed as customers,” he said.

“Other suspects were dressed in camouflage jackets and jeans, not exactly dissimilar to standard military camouflage outfits.”

More information on the suspects’ identities is expected in the next couple of days, he said, before adding that fingerprints and other evidence collected from the location where the van was hijacked and the gold shop are being examined.

“The investigation at this point found the suspects traveled in the hijacked van to the gold shop in Songkhla,” he said.

“They left the van in a rubber plantation in tambon Tha Pradu before fleeing in different directions.” 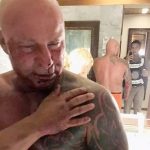