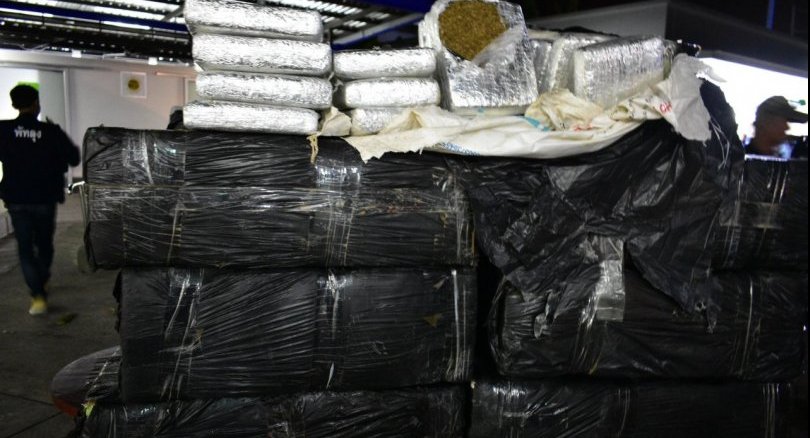 Four suspects were arrested in Phatthalung as police intercepted an attempt to smuggle 572 kilograms of marijuana from Mukdahan to Songkhla on Monday night, police said.

Pol Colonel Chotiwat Luangwilai, deputy Phatthalung police chief, said two suspects were arrested in a pick-up truck with the drug, along with a couple who were arrested in a sedan car that drove ahead of the pickup to advise the truck to avoid road checkpoints.

Acting on a tip-off, police monitored the two vehicles from Khuan Khanun district before they made the arrests in Muang district.

The pickup was stopped after it made a u-turn to buy petrol at the Asia Intersection. The driver, Plaeng Khongna, 59, and passenger Suwit Mongkol Supha, 47, were arrested. Both are residents of Mukdahan’s Muang district.

Police found 572 bars of compressed marijuana bars in 13 wraps, with each bar weighing one kilogram.

The suspects denied any knowledge of the drug, claiming they were hired by two Lao men to drive winter melons and sponge gourds from Mukdahan to Hat Yai district in Songkhla. They said the two Lao men loaded the goods for them to drive and they were promised Bt45,000 on arrival.

Police also arrested a couple as they drove into a bungalow about a kilometer from the petrol station where the pickup was stopped.

The couple declined to speak to police after the arrest, but records of phone calls from their mobile phones showed they had made calls to the phones of the two suspects in the pickup.