A BPP patrol unit and troops from the 5th Cavalry Taskforce in Chiang found the drugs in a cave in Ban Tham Klaeb in Tambon Ping Khong at noon on Wednesday while they were jointly patrolling the area.

The meth pills were found in 50 bags and the crystal ice in 10 bags.

Pol Lt Col Dilok Arinpeng, commander of the 335th Border Patrol Police Company, said the cave was on a steep mountain and police had difficulty carrying it out.

The authorities had to rush to remove the drugs from the cave before dusk for fear of attacks by the drug ring, Dilok said.

He said the drug was apparently hidden there before it was smuggled into deeper Chiang Mai. 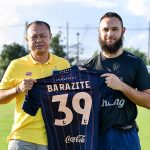