A stampede of more than 300 guests fled a three-star Pattaya hotel in a panic in the wee hours of yesterday morning when a fire suddenly broke out on the building’s 12th floor.

Fortunately, there were no casualties.

At 1:30AM, Muang Pattaya police received a report regarding a fire at the 14-story beachfront Grand Jomtien Palace Hotel located in Chonburi province’s Bang Lamung District.

The fire caused a power blackout inside the hotel, which was rapidly filling with smoke, according to Workpoint.

At that point, guests — many of whom were Chinese and Russian tourists — and employees began rushing for the exits.

It reportedly took firefighters about 30 minutes to put out the fire, which they believe began in the 12th-floor control room.

Initial inspection led investigators to suspect that a short circuit was the cause of the flames. However, investigations into the incident continue. 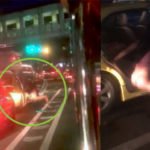