Home » Peace TV to be unplugged for one month

Peace TV is to be kicked off the air for one month in a decision by the National Broadcasting and Telecommunications Commission (NBTC) that enraged its popular lead anchor. NBTC secretary-general Takorn Tantasith announced the decision to temporarily suspend the licence of the broadcaster on Wednesday. The suspension will take effect after the satellite-based station is notified by a letter from the telecom regulator, he added.
Peace TV was still on air on Wednesday evening, but is expected to go blank soon after the NBTC letter reaches the operator. In past periods of censorship, the station has continued to send content through its YouTube channel.

The NBTC cited programmes broadcast between March 26 and April 9 as the reasons to shut the station for a month, saying their content was considered likely to incite conflict.
The telecom regulator also warned Peace TV of future harsher punishment if it continues to commit “violations”.
The NBTC move was the second station suspension this year, following a 15-day closure in February.

Peace TV is linked to the United Front for Democracy against Dictatorship (UDD), with red-shirt leader Nattawut Saikuar as one of its popular hosts.
Mr Nattawut, who hosted his regular programme on Wednesday, accused the NBTC of selectively targeting the station as a means of supporting the government.
The UDD leader suspected the NBTC decision is linked with concern over protest activities timed to coincide with the four-year anniversary of the coup on May 22. 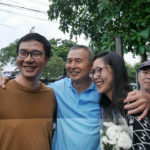