Home » 25 Years Later, Dumb And Dumber Is Still One Of The Greatest Comedies 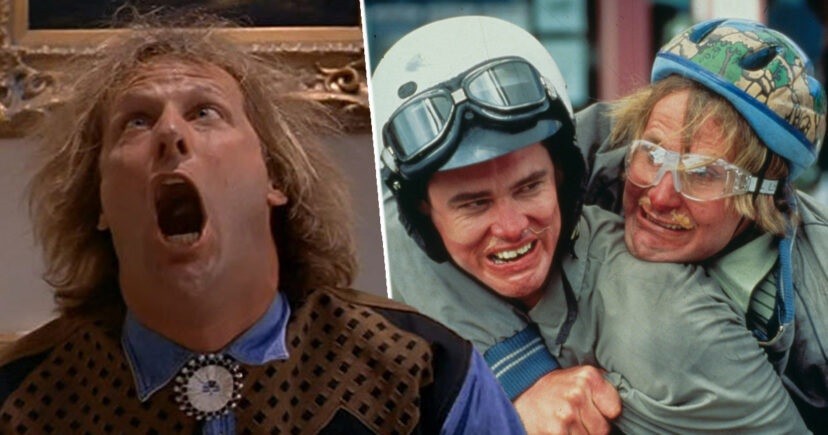 Crash by The Primitives bellowing through your speakers, a blind kid’s dead parakeet, the unholiest of toilet explosions: welcome to Dumb and Dumber.

Last year, Green Book swooped the Oscar for Best Picture. A heartwarming story of cultural divides and the futility of racism (though, not without its problems), film-goers were hooked by its happy-go-lucky, kindhearted charm.

For director Peter Farrelly, it marked a move into drama, away from the crass likes of Movie 43 (heinous), Shallow Hal (shallow) and There’s Something About Mary (great). However, his debut feature remains his magnum opus – a ferociously smart film about two goofs on the walk of life. 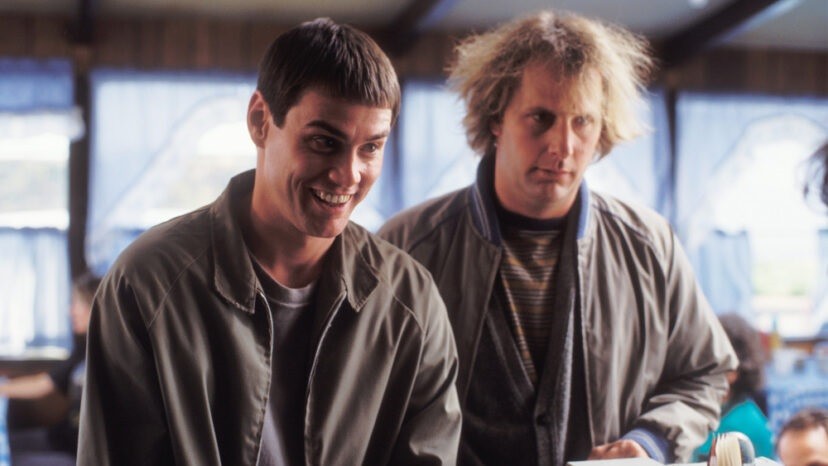 1994 was a hell of a year for cinema: The Shawshank Redemption, Pulp Fiction, Forrest Gump and The Lion King, to name a few now-renowned classics. Though, one genre above all endured a seismic shift: comedy.

Enter Jim Carrey: the body-morphing, face-contorting, maniacal force of nature that’d change the game in not just one, but three comedy gems: Dumb and Dumber, The Mask and Ace Ventura: Pet Detective. His career was only just in the ascendancy when he signed on for Farrelly’s debut (for a record-breaking $7 million), but he’d soon shoot to the realms of legends.

But for a time, Dumb and Dumber was struggling to get off the ground. Countless actors passed on the script, their wise agents brushing it under the carpet with a hushed swipe. After changing the title temporarily to A Power Tool Is Not a Toy, people started to read.

Before they knew it, the leading duo of Carrey and Jeff Daniels was oven-ready (studio execs were opposed to Daniels, who until then hadn’t performed in a no-holds-barred comedy role, but the directing team of Peter and his brother Bobby – as well as Carrey – vouched for him steadfastly).

The film follows Lloyd Christmas (Carrey), a limo driver who falls hopelessly, profoundly in love with Mary Swanson (Lauren Holly), a client he drives to the airport. When she ‘accidentally’ forgets a briefcase (in fact, left as a ransom payment to the mob), he embarks on a cross-country trip in a sheepdog van to Aspen to return it, alongside best bud Harry Dunne (Jeff Daniels). 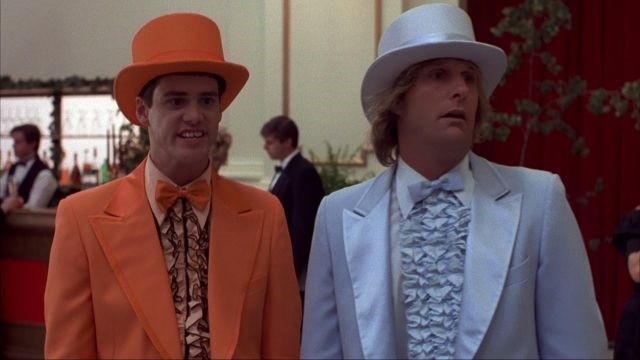 Rocking the look of a dimwit who cut his own hair and ran into a wheelie bin, Lloyd is a lovesick buffoon with nary a shred of common sense. He operates on a madcap plain of existence, where Austrians put ‘shrimps on the barbie’ and mouth-freshening sprays are basically a mental tick.

It’s the moronic questions – for example, ‘Why you going to the airport… flying somewhere?’, or the simple use of ‘Pourquoi?’. There’s barely one word that leaves Lloyd’s mouth that couldn’t be considered daft, at the least.

On the other hand, Harry embodies the shaggy pooch of his anthropomorphic vehicle (or as his pal brands it, the shaggin’ wagon). More laconic in nature than his motor-mouth pal, he arguably has even less awareness of himself than Lloyd (one only need look at the moment he obliviously sets himself on fire at a gas station).

If Wayne’s World’s loveable head-bangers ignited a comedy revolution, Dumb and Dumber’s dumbos, in their dreams of love and opening a store called ‘I Got Worms’, stretched the genre to universal incontinence.

Many cite the ransom side-plot (with a delightfully on-brand Mike Starr as a ‘Mental’ henchman) as a tiresome detour from the duo’s jollity. But without it the film doesn’t get to show its hidden strengths: namely, the women who don’t give a flying f*ck about the men. 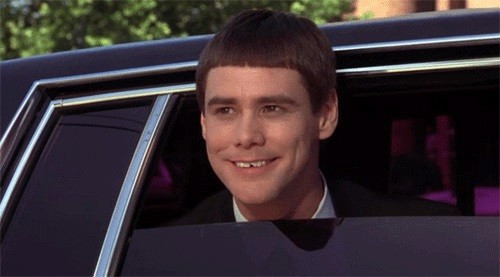 Mary is a socialite, privy to high-class ski-trips on a whim and $500-per-plate dinners. Her lofty position in society is never glared upon though; rather, she’s just another component in the world the boys consider to be a playground.

In her initial interactions with a wide-eyed and deviant Lloyd, she resorts to good ol’-fashioned politeness in the face of an oddity. The nervous chuckles, the hairdresser-esque small talk, the reluctant hug at the airport: Mary never truly enables Lloyd or hints towards similar feelings.

It’s true one half of the gruesome twosome is infatuated by Mary: but in his wicked leering, sexual daydreaming (to the bubbly rhythm of The Rain, the Park & Other Things) and unwarranted love, it’s never really objectifying her. Rather, it’s only at the expense of Lloyd himself – testifying to his and Harry’s juvenile nature all the more.

In both their direction and script (alongside Bennett Yellin on zinger duties), the Farrellys achieved the lightning-in-a-bottle effect with Dumb and Dumber: a rare, unprecedented concoction of gross-out guffaws and incisive performances (as witnessed with both the prequel, Dumb and Dumberer, and the sequel, Dumb and Dumber To, it can’t and won’t be replicated).

That’s down to its episodic-like structure, flowing like a feature-length episode of The Harry and Lloyd Show. It’s a gag-athon that holds your bladder in a tight grip, whether it be the most annoying sound in the world, Harry’s elastic tongue on a ski chair, or Lloyd’s pissing abilities akin to the Trevi Fountain.

In this, it’s much in the same spirit as Airplane!, another ludicrous romp focused on one thing alone: making you laugh. One line in particular strikes a similar wit: when a police officer orders to Harry, ‘Pullover!’, he replies: ‘No it’s a cardigan, but thanks for noticing.’

The Farrellys’ fondness of toilet humour echoes through their work (for example, the sneeze-shit – the snit? – in Hall Pass). Dumb and Dumber started it all though, with THE cinematic pooping moment.

After Lloyd laces his tea with a full bottle of laxatives before a big night out, Harry finds himself in an unfortunate situation at a woman’s house: bursting to the brim with jobby like the Stink Spirit in Spirited Away.

As he plonks his butt down on the (broken) toilet, so begins the greatest-ever minute of on-screen defecation, the pièce de résistance of all the rotten tomfoolery. We witness Daniels travel through the uncharted stages of diarrhoea-induced trauma, veins popping and squeals galore (with a complimentary giggle at the last squeaking fart). As far as side-splitting bowel emergencies go, Daniels and the Farrellys raised literal shit to high-art.

Going for a number two is an immature, but innocent affair. Yet the film isn’t without its sinister moments: the pair sell their dead, beheaded bird to a blind child as a way of raking in some extra cash, and one scene sees Lloyd literally seconds away from being horrifically raped by a redneck in a petrol station.

But those moments (okay, maybe not the latter) add to its charm. Underneath the rollercoaster of sketches lies a brilliant parody of American culture; taking jabs at rednecks, the mafia, diners, cowboys, and the glory of the road trip. 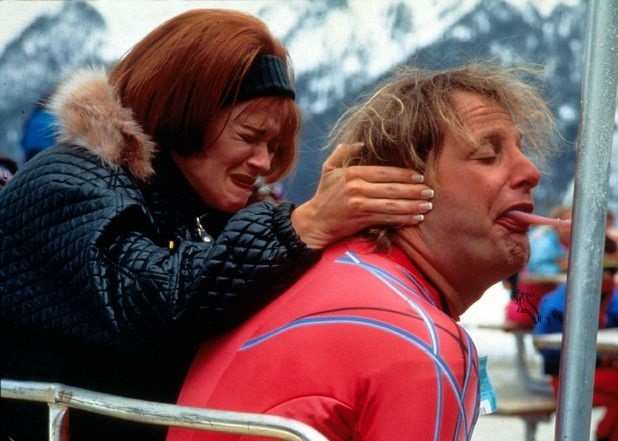 That said, the music is another major takeaway, perfect listening for any long drive with friends, from the soothing Mmm’s of Crash Test Dummies to The Proclaimers’ sing-along cover of Get Ready (which, criminally, isn’t available on Spotify – an injustice, I say!).

‘I’m sick and tired of having to eke through life,’ Lloyd tells Harry early on – and that’s the film’s enduring appeal. They’re undoubtedly useless oafs (when Harry says there’s not a single job out there, Lloyd replies, scoffing: ‘Yeah, unless you wanna work 40 hours a week!’), with the fact they’ve made it this far being a feat on its own.

But they’re not too far gone – you can’t help but fall under their hopelessly hopeful spell. The fact the Farrellys managed to make these characters even semi-likeable is its own triumph, but their mastery of slapstick is still unrivalled today.

As the credits roll and the pair walk off into the dusty horizon, parroting ‘You’re it’ for, assumingly, eternity, one quote comes to mind: ‘I hate goodbyes.’ 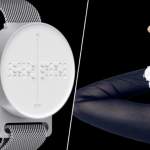 Braille Smartwatch For The Blind Has Been Invented