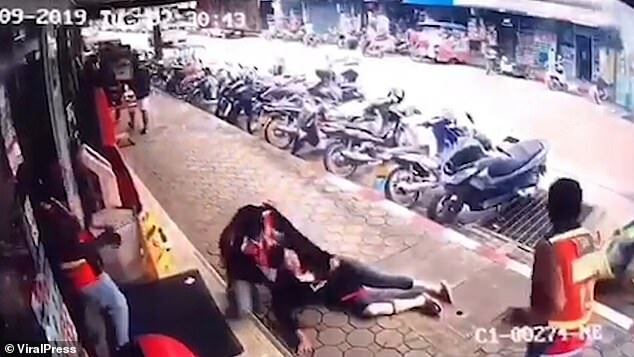 Woman survives huge electric shock after a falling 22,000-VOLT power line hit her as she crossed the street in Thailand

A woman has miraculously survived after a 22,000 Volt electricity cable fell on her as she waited to cross the street.

Malinee Weerasuchart, 38, was standing on the pavement when the overhead cable fell and touched her legs causing a bright flash of sparks.

CCTV footage from a grocery shop opposite captured the incident in Nakhon Ratchasima, northeastern Thailand.

Video shows the wire hitting Mrs Weerasuchart’s shoulder before she is pulled backwards and the exposed end falls on her right leg.

As she is electrocuted and falls to the ground a nearby motorcycle taxi rider drags her away from the wire to safety on the pavement.

Shortly after this another flash is seen on the footage causing the people on the street to jump and drag Mrs Weerasuchart further from the road.

Mrs Weerasuchart’s husband, Suriya, revealed details of the incident this week after his wife spent the last two months recovering from severe burns on her leg.

He said: ‘My wife was electrocuted very badly. The motorcycle taxis told me that there were sparks coming off of her body.

Mrs Weerasuchart has had two months of rehabilitation and her family say they have spent 974,315 baht (£25,096) on medical bills.

They claim that the Thai government’s Provincial Electricity Authority (PEA), which is responsible for the cable, has not paid them any compensation.

Mrs Weerasuchart said: ‘The PEA came to visit me after the accident and promised to pay for the medical bills but two months has passed and I did not receive any repayment.

Speaking today, the PEA regional director Natthawat Akararungruengkul said that the authorities are aware of their mistake and promised to improve the safety of their equipment.

He said that compensation was taking longer than expected because of the relatively high medical costs.

He said: ‘We are guilty of the accident that happened and we accept that it was a mistake by our authority, which we have promised to improve.

‘We have been negotiating with the family about the medical costs since the accident happened and the family requested 12 million baht (£309,137).

‘I brought the issue to the board and it is under investigation, because that much money we cannot just payout instantly.

‘We did not mean to leave the victim to suffer without but we need to go through the correct procedures.’ 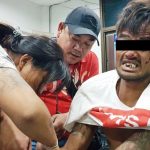 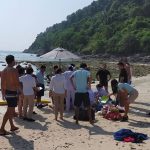 Another drowning tourist saved in Phuket