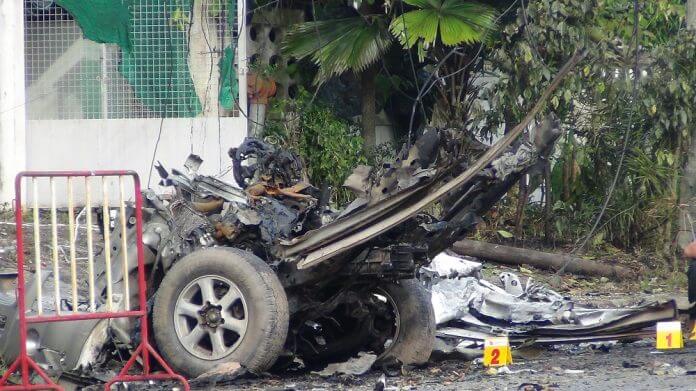 One of several gunmen accused of stealing pickup trucks at gunpoint and killing a hostage was sentenced to death Tuesday by a southern court.

Eighteen months after the brazen attack, Attanan Sa-i was sentenced to die by the Na Tawee Court in Songkhla province after being found guilty of several crimes including violating national security, engaging in extremism, robbery and murder.

Another three – Panumat Lheesen, Maroyee Radaeng and Hariya Garee – were given life sentences for the attack, which authorities at the time blamed on a new faction of insurgents in the violence which has persisted for nearly 15 years.

Abdulmanus Jae-loh, the fifth gunman was convicted of being a criminal conspirator and sentenced to two years and eight months in jail.

The incident occurred on Aug. 16, 2017, when the gunmen raided a car dealership and stole five vehicles. Four people were taken hostage – three employees and the owner – before one of them, Saharat Laeni, was shot dead.

The perpetrators drove over the border from Songkhla into Pattani’s Nong Chik district with police in pursuit. A shootout took place, and a suspect in one of the trucks was shot dead.

He was later identified as Nurhasan Arwear, a 23-year-old student in Pattani province. Police found 80 kilograms of explosives and seven fuel tanks inside the vehicle he was driving.

The next morning, one of the five vehicles stolen from the car dealership exploded at a police station in Pattani province. No one was killed or injured.

Car bombs are a common weapon of separatist militants in the Deep South.