The police detained 20 Thai women and a local man in a raid at an entertainment outlet in Kuala Lumpur on Friday (July 26) night.

Kuala Lumpur CID chief Senior Asst Comm Rusdi Md Isa said in a statement on Saturday (July 27) that all detainees were brought to the Brickfields police headquarters for follow-up investigations.

“Around 22 patrons were also inspected and urine tests were also conducted. The police also found that the outlet was operating without an entertainment licence from DBKL,” he added 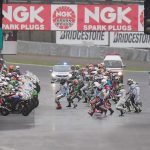