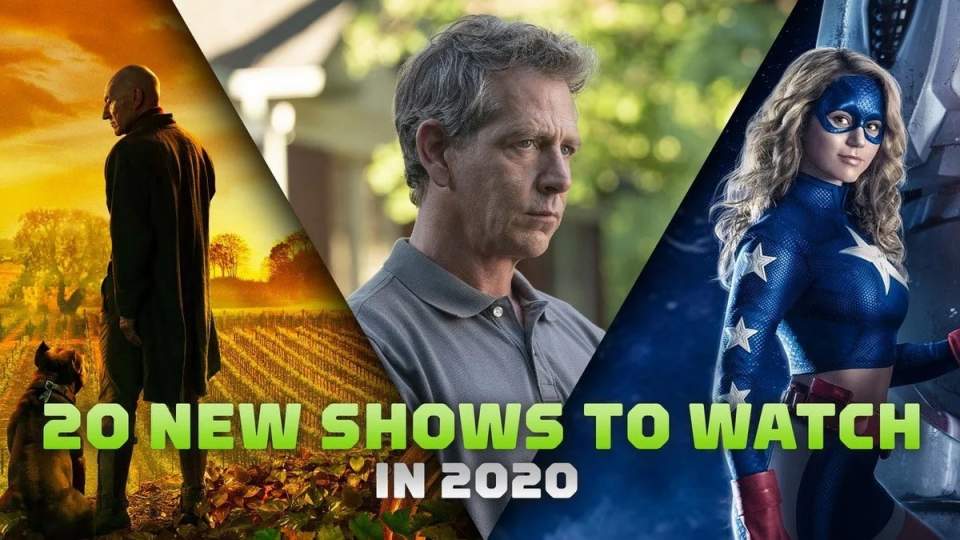 The new year brings a new slate of TV shows for your viewing pleasure, so we’ve rounded up 20 of the biggest, most-anticipated series that are expected to premiere in 2020, just so you can get a head start on your watchlist.

This is far from an exhaustive list – in case you haven’t noticed, there’s a lot of TV these days – but a selection of new series that are on our radar that we’re fairly confident will premiere this year (even if their release dates haven’t been confirmed yet) and we think our audience might be interested in too. (High-profile genre series like Showtime’s Halo adaptation and Amazon’s Lord of the Rings have been slated to arrive in 2021 if you were curious why they’re not included.)

For our 20 new TV picks in 2020, check out the gallery below or scroll down for the list. 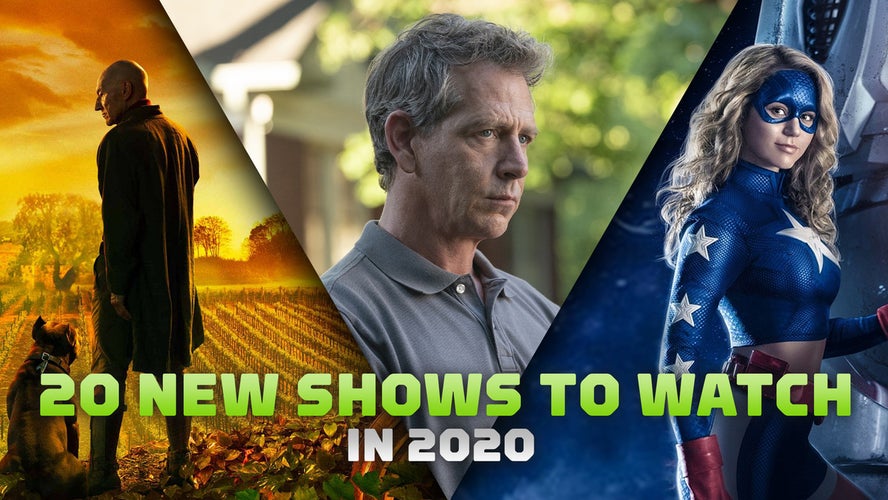 Based on the Stephen King thriller of the same name, The Outsider may fill the void of True Detective as “a seemingly straightforward investigation into the gruesome murder of a local boy leads a seasoned cop and an unorthodox investigator to question everything they believe to be real, as an insidious supernatural force edges its way into the case.” Ben Mendelsohn and Cynthia Erivo star in HBO’s new crime series, executive produced by Jason Bateman, who also appears in the series and directs the first two episodes.

Veep creator Armando Iannucci’s space tourism comedy is set 40 years in the future, when the solar system is everyone’s oyster. With Hugh Laurie as the captain, what can go wrong? The cast also features Josh Gad, Zach Woods, Nikki Amuka-Bird, Rebecca Front, Lenora Crichlow, Suzy Nakamura, and Ethan Phillips. On a similar sci-fi comedy note, keep an eye out for Netflix’s Space Force, “centered around the people tasked with creating a sixth branch of the armed services… Space Force,” from The Office’s Greg Daniels, starring Steve Carell and John Malkovich.

Picard “features Sir Patrick Stewart reprising his iconic role as Jean-Luc Picard, which he played for seven seasons on Star Trek: The Next Generation. The new series will follow this iconic character into the next chapter of his life,” and feature the return of Star Trek alums including Jonathan Frakes, Brent Spiner, Jeri Ryan, and Marina Sirtis, along with series regulars Santiago Cabrera, Michelle Hurd, Evan Evagora, Alison Pill, Harry Treadaway, and Isa Briones.

An adaptation of the IDW comic by Joe Hill and artist Gabriel Rodriguez from showrunner Carlton Cuse, Locke and Key “revolves around three siblings who, after the gruesome murder of their father, move to their ancestral home in Maine only to find the house has magical keys that give them a vast array of powers and abilities. Little do they know, a devious demon also wants the keys, and will stop at nothing to attain them.”

Based on Celeste Ng’s 2017 bestseller and starring Reese Witherspoon and Kerry Washington, “Little Fires Everywhere follows the intertwined fates of the picture-perfect Richardson family and an enigmatic mother and daughter who upend their lives. The story explores the weight of secrets, the nature of art and identity, the ferocious pull of motherhood – and the danger in believing that following the rules can avert disaster.”

“Set more than seven years after the world has become a frozen wasteland, Snowpiercer centers on the remnants of humanity, who inhabit a 1001 car, perpetually-moving train that circles the globe. Class warfare, social injustice and the politics of survival” play out in this television adaptation of Bong Joon-ho’s 2013 film and the graphic novel Le Transperceneige.

Created by Ex Machina and Annihilation mastermind Alex Garland, Devs is described as “a high-tech suspense thriller about a young software engineer (Sonoya Mizuno) who investigates the secretive development division of her employer, which she believes is behind the murder of her boyfriend.”

Per The CW, “the new DC Universe drama follows high school sophomore Courtney Whitmore (Brec Bassinger) as she inspires an unlikely group of young heroes to stop the villains of the past. This new drama reimagines Stargirl and the very first superhero team, the Justice Society of America, in an unpredictable series. Stargirl will make its debut first on DC Universe’s digital subscription service, then broadcast on The CW the following day and stream on The CW digital platforms the day after that.”

According to Showtime, “City of Angels opens in 1938 Los Angeles, a time and place deeply infused with social and political tension. When a grisly murder shocks the city, Detective Tiago Vega is embroiled in an epic story that reflects the rich history of Los Angeles: from the building of the city’s first freeways and its deep traditions of Mexican-American folklore, to the dangerous espionage actions of the Third Reich and the rise of radio evangelism. Before long, Tiago and his family are grappling with powerful forces that threaten to tear them apart.”

Based on Aldous Huxley’s seminal sci-fi novel, this adaptation was originally ordered for Universal’s Syfy network before being moved to the company’s upcoming streaming service. According to Deadline, “Brave New World imagines a utopian society that has achieved peace and stability through the prohibition of monogamy, privacy, money, family, and history itself. As citizens of New London, Bernard Marx (Harry Lloyd) and Lenina Crowne (Jessica Brown Findlay) have only ever known a rigid social order, a perfect pharmaceutical called Soma, and a culture of instant gratification and ubiquitous sex. Curious to explore life beyond the strictures of their society, the two New Worlders embark on a vacation to the Savage Lands, where they become embroiled in a harrowing and violent rebellion before being rescued by John the Savage (Alden Ehrenreich), who escapes with them back to New London. John’s arrival in the New World soon threatens to disrupt its utopian harmony, leaving Bernard and Lenina to grapple with the repercussions. The three become entwined in a fraught relationship that awakens them to the dangers of their own conditioning.”

According to Amazon, “Hunters follows a diverse band of Nazi hunters living in 1977 New York City. The Hunters, as they are known, have discovered that hundreds of high-ranking Nazi officials are living among us and conspiring to create a Fourth Reich in the U.S. The eclectic team of Hunters will set out on a bloody quest to bring the Nazis to justice and thwart their new genocidal plans.” The series stars Al Pacino, Logan Lerman, Jerrika Hinton, Josh Radnor, Kate Mulvany, Tiffany Boone, Greg Austin, Louis Ozawa Changchien, Carol Kane, Saul Rubinek, Dylan Baker and Lena Olin.

The Falcon and the Winter Soldier (Disney+) – TBD

The first Marvel Studios series to launch on Disney+, The Falcon and the Winter Soldier follows on from the events of Avengers: Endgame as Sam Wilson (Anthony Mackie) and Bucky Barnes (Sebastian Stan) attempt to fulfill the legacy of Captain America after the retirement of Steve Rogers. The series will also see the return of Daniel Brühl as Baron Helmut Zemo, and Emily VanCamp as Sharon Carter, plus the addition of Wyatt Russell as US Agent John Walker to the MCU. Disney+ also announced that WandaVision has been moved up from its Spring 2021 release and will premiere in 2020, so needless to say, we’re pretty hyped for that, too.

Executive produced by Jordan Peele, the hourlong drama based on the 2016 novel by Matt Ruff “follows Atticus Black (Jonathan Majors) as he joins his friend Letitia (Jurnee Smollett-Bell) and his Uncle George (Courtney B. Vance) to embark on a road trip across 1950s Jim Crow America in search of his missing father. What follows is a struggle to survive and overcome both the racist terrors of white America and the terrifying monsters that could be ripped from an H.P. Lovecraft paperback.”

Based on the 1898 novella The Turn of the Screw by Henry James, Mike Flanagan’s follow-up to The Haunting of Hill House will reunite much of Hill House’s cast for a new horror tale, including Victoria Pedretti, Oliver Jackson-Cohen, Kate Siegel, Henry Thomas, and Catherine Parker, along with iZombie’s Rahul Kohli. Pedretti will reportedly play the governess who moves into Bly Manor to take care of two orphaned children, but the rest of the roles have been shrouded in secrecy. (Pictured: Flanagan, Siegel, Jackson-Cohen, and Pedretti.)

Executive produced by Ridley Scott, new sci-fi series Raised By Wolves follows “two androids — Father and Mother — tasked with raising human children on a mysterious new planet. As the burgeoning colony of humans threatens to be torn apart by religious differences the androids learn that controlling the beliefs of humans is a treacherous and difficult task.” Vikings star Travis Fimmel headlines the new series that was originally developed for TNT but will debut on WarnerMedia’s HBO Max streaming service.

Hulu has given a two-season order to animated sci-fi comedy Solar Opposites from Rick and Morty creator co-creator Justin Roiland and executive producer Mike McMahan. Much like Rick and Morty, Roiland will lend his voice to two of the characters. Per Deadline, “the series centers around a family of aliens from a better world who must take refuge in middle America. They disagree on whether this is awful or awesome.” The cast also includes Tiffany Haddish, Alfred Molina, Christina Hendricks, Andy Daly, Alan Tudyk, and Thomas Middleditch.

A limited event series, The Stand is described as “Stephen King’s apocalyptic vision of a world decimated by plague and embroiled in an elemental struggle between good and evil. The fate of mankind rests on the frail shoulders of the 108-year-old Mother Abagail (Whoopi Goldberg) and a handful of survivors. Their worst nightmares are embodied in a man with a lethal smile and unspeakable powers: Randall Flagg, the Dark Man,” played by Alexander Skarsgård.

Gone Girl author Gillian Flynn is adapting this high-concept British thriller (which aired for two seasons on Channel 4 in the UK) for Amazon. Per Amazon, “a group of comic book nerds who meet online all share a love for the mythical graphic novel called UTOPIA. They discover the conspiracy theories in the comic’s pages may actually be real, and are hunted by a deep-state organization. This unlikely group of heroes are forced into the dangerous and ironic position of saving humanity and the world.” The cast includes John Cusack, Rainn Wilson, Sasha Lane, Dan Byrd, Desmin Borges, and Cory Michael Smith. 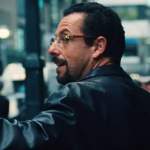 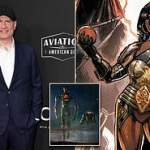 Marvel is set to debut its first transgender superhero