Home » 10kg of crystal meth found in a car 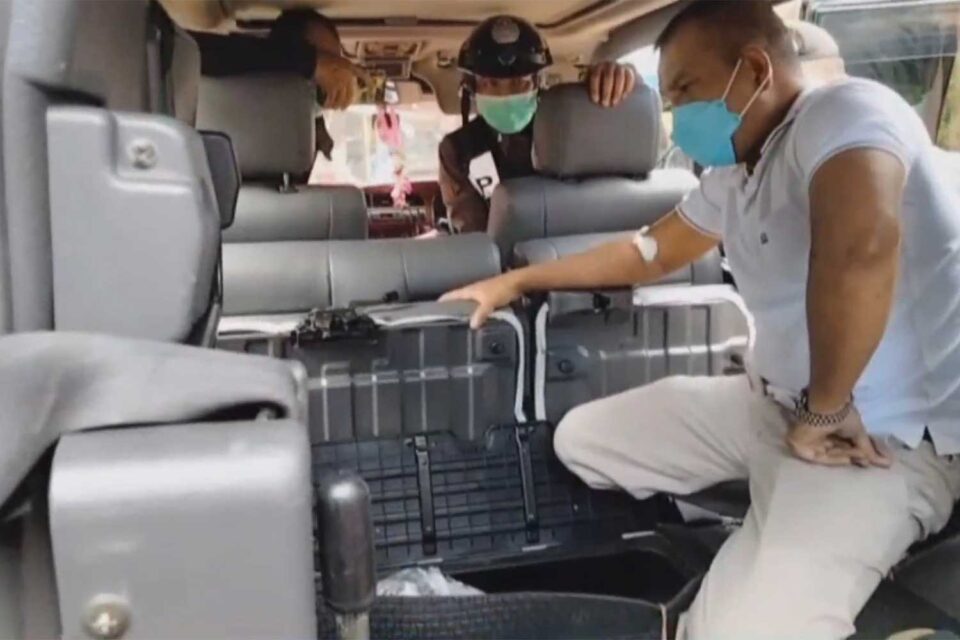 A man and his wife were arrested after 10 kilogrammes of crystal methamphetamine were found in their vehicle, in which their 9-year-old daughter was also a passenger, in Thong Pha Phum district.

Police on Friday announced the arrest of Sombat Ouanseng, 50, and his wife Chayaphan Srisuksai, 45, both natives of Songkhla province.

They were travelling in an old Isuzu Trooper with Bangkok licence plates.

Ms Chayaphan is an official at Wang Ka tambon administration organisation in Sangkhla Buri district of Kanchanaburi, acording to police.

Their apprehension followed the earlier arrest of another couple, Manam Saiha and  Wanpen Srinuanchan, with 32,000 meth pills in Muang district of Kanchanaburi on Oct 27 this year.

Their evidence pointed to Mr Sombat’s alleged involvement in the drug trade. His movements were watched.

When Mr Sombat left his house in Sangkhla Buri district on Thursday morning, police followed his car.  He was stopped at a checkpoint in Thong Pha Phum district  around 11.30am.

The officers following him arrived and searched the vehicle, in which Ms Chayaphan and their daughter, aged 9, were passengers.

The search found 14 packages containing crystal meth, 10 kilogrammes in total, according to police.

Mr Sombat was taken back to his house in tambon Nong Lu of Sangkhla Buri district. A search found nothing illegal there. He was taken to Thong Pha Phum police station.

Urine tests on Mr Sombat and his wife were negative for drug use. They were charged with collusion in possession of illicit drugs.

During questioning, Mr Sombat allegedly confessed to all charges, but said he acted alone  and his wife was not involved.

He told police he had  first taken his wife and daughter to see a doctor that day, and was on his way to Muang district with the drugs he was carrying.

He allegedly said it was his seventh delivery. He was being paid 30-40,000 baht a time. He said he had made previous monthly deliveries of meth pills to a man in Surat Thani province’s Chaiya district, according to police.

The arresting team handed the couple over to Thong Pha Phum police for legal action. The investigation was continuing.