From Ajit Pai to Lavar Ball to Bhad Bhabie, check out our list of the most hated people below: 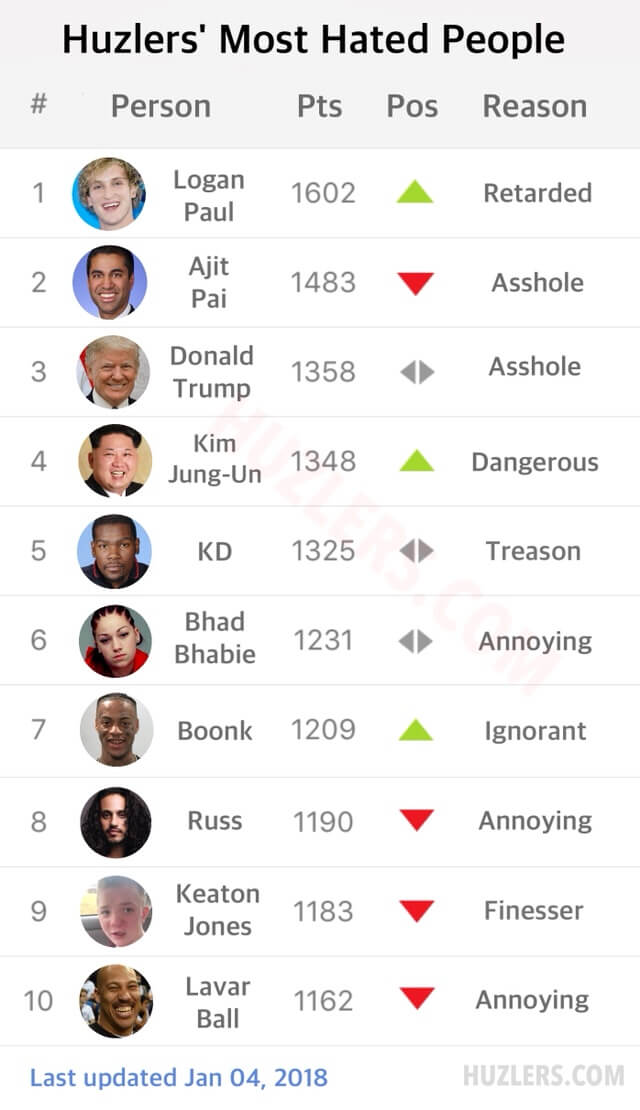 Known for his cringy humor, and annoying personality, Logan Paul is the most hated person following his Youtube video where he shows the body of a suicide victim and appears laughing.

Referred to many as the anti-christ, Ajit Pai is the second most hated person for his push to rid the internet of ‘net neutrality’, which can effect nearly anyone who uses the internet.

America’s president, criticized for being racist, sexist, immature, and well, an asshole. Can’t seem to refrain himself from making controversial statements and tweets. Not only hated by Americans, but people worldwide.

Known for being a very dangerous “dictator-like” leader. Hated for being a threat to the entire world, with a reported new arsenal of nuclear weapons. Also Donald Trump’s arch-nemesis.

Not only hated by fans of his former OKC team, but NBA fans in general, after joining arguably the NBA’s best current team, the Golden State Warriors. Just ask his former pal and teammate Russell Westbrook.

Rising to fame after appearing on the Dr. Phil show and coining the phrase: “Catch me ousside how bow dat”. Infamous for her disrespectful attitude and “trashy” persona, Bhad Bhabie is here to stay, regardless.

Ever seen those videos of that guy recording himself stealing shouting “Boonk Gang”? yup, this is that guy. Known for being a menace to society and posting “ignorant” videos on IG of him disturbing random people.

Often refered to as “corny”. Russ is hated for being annoying and arrogant, never forgetting to remind people that he writes and produces his music himself. Also hated for recently attacking famous rappers and the druggy-rap culture.

After receiving national attention for being mercilessly bullied, many donated thousands of dollars to Keaton’s cause only to later find out his family were confederates, and that he was allegedly being bullied for being racist. Finesse king Keaton.

Hated for always being in the media making ridiculous statements including saying his son Lonzo Ball was better than Stephen Curry, and that he himself can beat the great Michael Jordan 1v1, we would love to see that.