After the release of the welfare card less than 1 month ago for Thai’s on low monthly incomes, a total of 1.7 Billion Baht has already been spent.

Mr Sonthirat on Friday (Oct 20) led a team of commerce officials to inspect spendings by low-income earners at stores joined in the government’s scheme to sell daily necessities to the people at lower than market prices.

Mr Sonthirat first visited stores in Samut Prakarn province to see how their business are after low-income  earners received the state-subsidized welfare smartcards to spend.

After visiting several stores, he said operators reported business has multiplied and bustled with customers coming to spend at their stores.

He then estimated that since Oct 1 when welfare smartcards can be used, the card holders have spent about 1.7 billion baht at stores joining the welfare scheme across the country.

But he admitted there still is problem with the Electronic Data Capture (EDC) system that is needed to be resolved.

He expected that by November, EDC machines will be installed at 18,000 stores.

Commenting on a proposal to transfer bus and train subsidy to purchase daily necessities instead as low-income earners in rural areas don’t need to travel on electric train or bus as people in urban areas, the minister said this would be assessed within the first month that how people spent on smartcards, and would then forward to the Government to make decision.

The vicious circle of the growing drug trade in Thailand 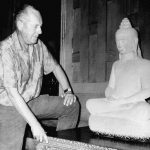